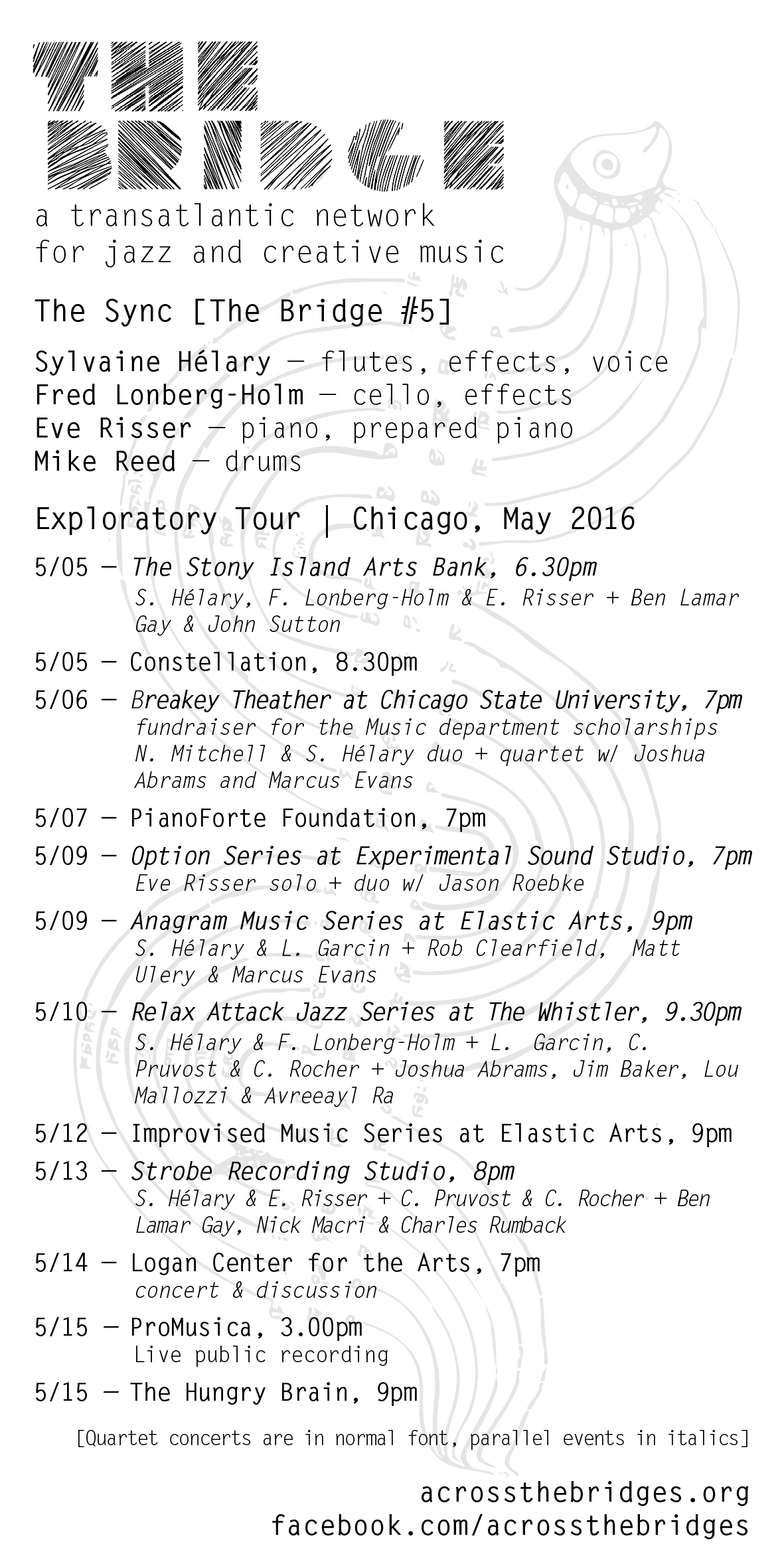 Groundbreaking. Breaking, mostly. For the kind of “novelty” that is about to be put on trial and put to practice by Sylvaine Hélary, Ève Risser, Fred Lonberg-Holm and Mike Reed – for the first time together – also savors erosion, the action of time, of the sun, of the rain, of the wind, and of inner life that leaves a mark on music, that shapes it or gnaws it. Novelty perhaps, and so be it, in that we could introduce these four musicians through all the genres they are able to approach and overrun. Because, on the French and American scenes, they have performed – if we were to unjustly reduce their biographies to a handful of memorable highlights or remarkable golden tickets – with the convulsive Joe McPhee, with the gargantuan Surnatural Orchestra, with the astonishing Roscoe Mitchell, with the mysterious trio En Corps (alongside Benjamin Duboc and Edward Perraud). When it comes to genres, they have the coat with voice to match, from today’s jazz to tomorrow’s tunes, by way of noise and improvised music – just as if improvisation, rather than a genre, weren’t precisely the great vehicle that allows crossing from one universe to the next, with sheer freedom, thoughtfully or thoughtlessly. Novelty, again, in the instrumentation – a flute, a piano, a cello, and a drum kit – that nearly incites to take the easy way with the promise of chamber music. And yet, while this combination of tones forebodes a modicum of hushed and restrained spaces, let us not forget that their makers are spaced-out enough that they are fond of role reversals and have the desire to venture through the looking glass.
Hélary, Risser, Lonberg-Holm, and Reed all know how to make radiance encroach upon entanglement, and spasm upon starkness. With grace and excess. Sylvaine and Eve dreamt of performing together; Eve had performed in Fred’s Lightbox Orchestra at Hagenfesten in Sweden a few years ago; Fred and Mike have recently collaborated in a quartet with Tortoise’s guitarist, Jeff Parker, and Wilco’s drummer, Glenn Kotche. Since the junctions to have the desire for and be able to cross The Bridge are already in place, let us reveal that her flute wears a blood-red evening gown; it’s the diaphanous devil itself. That her piano is cloudy, or spiky, arched on its legs or its spinwheel tip. That his cello, cactus- or skeleton-like, is a stockpile of explosives that will or will not explode, that has nevertheless become a master at launching torpedoes. That his drumkit is in free time, is as sober as it is constructive, ideally bowing and bending rhythms to release them back to volatility. It is at the intersection, at the carousel of these characters, on this strange carnival ride, that lies music waiting to be unearthed – for them and for us – thanks to the few plans these improvisers will have weaved, rather than strictly written compositions. Henri Michaux, in “Dessiner l’écoulement du temps”, had already described their method: “One line, or two or three, meeting others here and there, bushing here, hugging there, battling further down, rolling in a ball.” Therefore, expect walls of fog. Expect masked balls. Expect everything, for the unmatched pleasure of those who enjoy adventure. 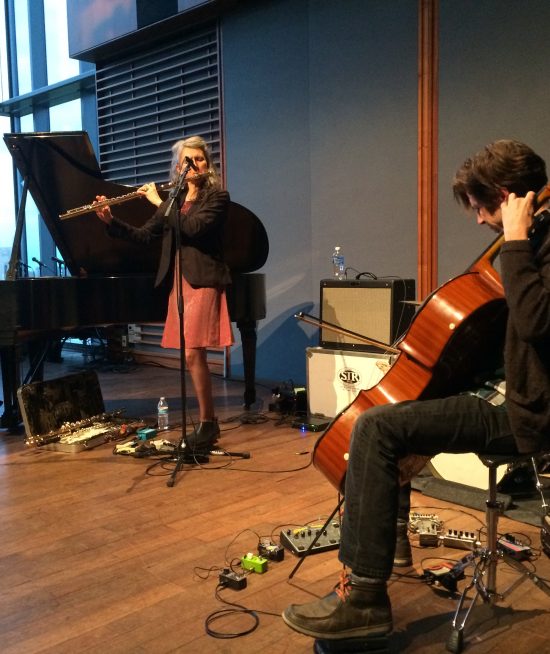 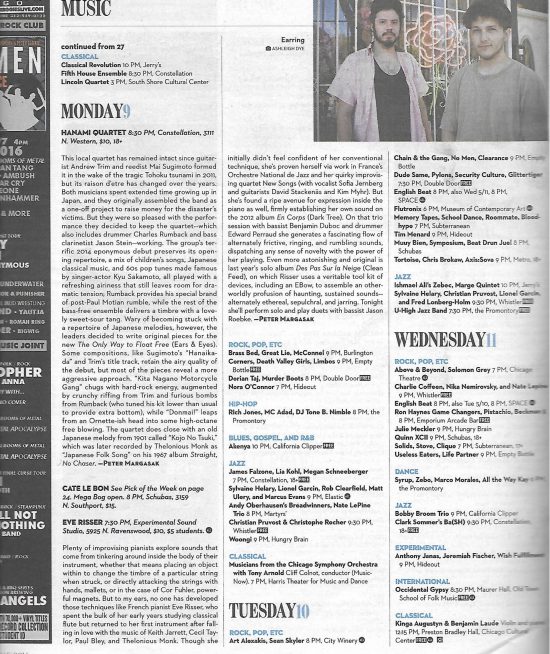 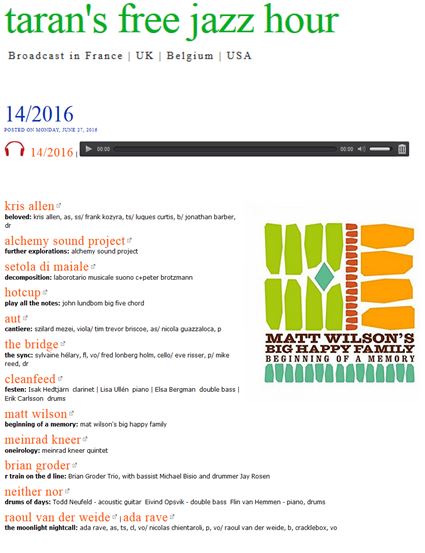 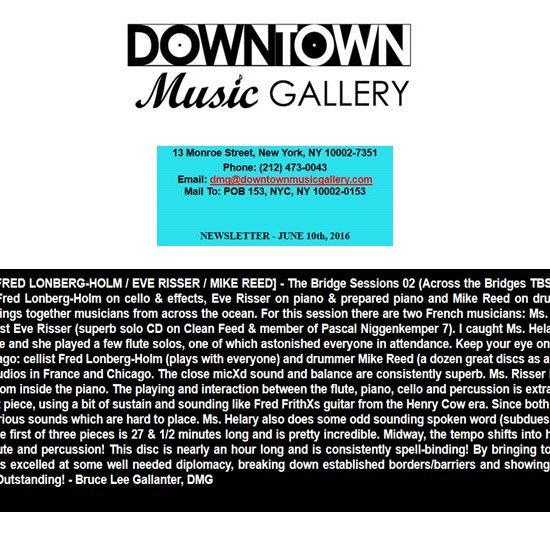