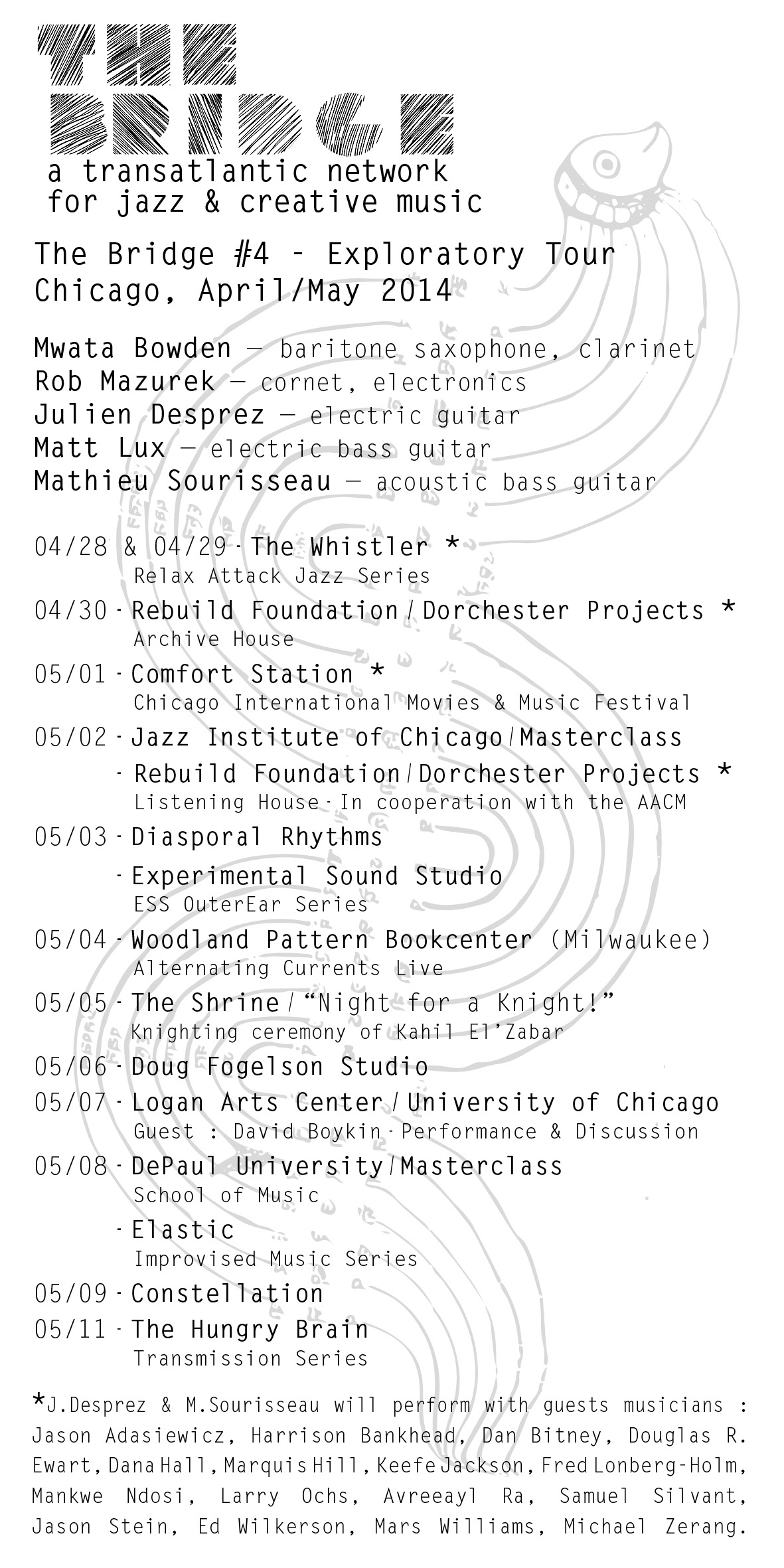 How can one describe, without immediately calling upon desire, a music that does not yet exist, that only has for itself an impassioned urge to be discovered, to find its every formula and reformulation? Possibly by using the words of guitarist Julien Desprez: “To me, the two basses and the guitar symbolize a deep tunnel, illuminated by the wind instruments. Waiting for us beyond this tunnel, there will be, perhaps, light or darkness…”

Can it thus be described through its “unconventional” instrumentation (therefore overlooking the fact that creative “jazz” music is about nurturing unfamiliarity, ever on the verge of surging at a moment’s notice, and knocking down familiarity, heeding its demands to be questioned and to become)? This quintet is driven by the urge to explore the possibilities of a formation deprived of keyboards and percussions, yet equipped with a distinctive string section: the ebbs of two bassists (Matt Lux and Mathieu Sourisseau) who don’t play the double bass, and the flow of a guitarist (Julien Desprez) who plays the electricity. The whirling streams of two wind instruments, and their outbursts of propelling sonic expanses, launch the ensembles in and out of orbit – a cornet (Rob Mazurek), and a baritone saxophone or a clarinet (Mwata Bowden). Resulting in music defined by gravities and forces of attraction.

How else? Describe it through the musicians’ personalities? This ensemble is also born from the meeting of a few individuals who answered the call of The Bridge, a transatlantic exchange network between musicians in Chicago and in France. Rob Mazurek and Matt Lux have known each other for a long time, especially since the Isotope 217 experiment, and have frequently collaborated in the orchestras that Mazurek ceaselessly imagines (Exploding Star Orchestra, Pharoah and the Underground, Pulsar Quartet…). Thanks to this quintet, they have the opportunity to actually perform with a beloved Chicago musician, former A.A.C.M. President, director of several ensembles at the University of Chicago, and recipient of the 2013 Chicago Jazz Hero Award: Mwata Bowden. Similarly, Julien Desprez and Mathieu Sourisseau have never played together. But they have both taken part in collective adventures that caused quite a stir in France’s improvised music in the last few years (such as the CoaxCollective for the former, the Tigre des platanes for the latter). They have both crossed paths with a few Chicago musicians: Sourisseau performed with Hamid Drake alongside Ethiopian singer Etenesh Wassié, and with Michael Zerang alongside poet Daniel Scalliett; Desprez with David Grubbs, or with Tortoise version 2.0 in Paris, and with Mazurek for an initial experiment in an abyssal duo. They both eagerly practice a necessary genre crossover, be it jazz, improvised music, electric or electronic music, and so-called “world” music… The Chicago musicians should not be reluctant to this, for they are naturally and culturally used to the unusual, as illustrated by the involvement of Bowden with the Chi-Lites (or with Muhal Richard Abrams), Mazurek with Stereolab (or with Bill Dixon), Lux with Iron & Wine (or with George Freeman).

But time after time, one can describe the unknown by the unknown. By drawing lines between certain projects of the musicians, separately – Radiation 10 for Julien Desprez, Sound Spectrum for Mwata Bowden, the Sound Is Quintet for Rob Mazurek… And thus, perhaps, reveal that in the field of music, they lead their own research on: vibratory phenomena; electromagnetic phenomena; energy sources; mankind’s place in the universe, the universe’s place within mankind; the states of transition from interiority (when everything is peaceful and auspicious) to exteriority (when everything is plowed and siphoned). Reveal that they use improvisation as a guidance system that can scout the road and route; follow and cover tracks; change the landscape, the territory, and the environment. Reveal that they rearrange every origin and every destination. 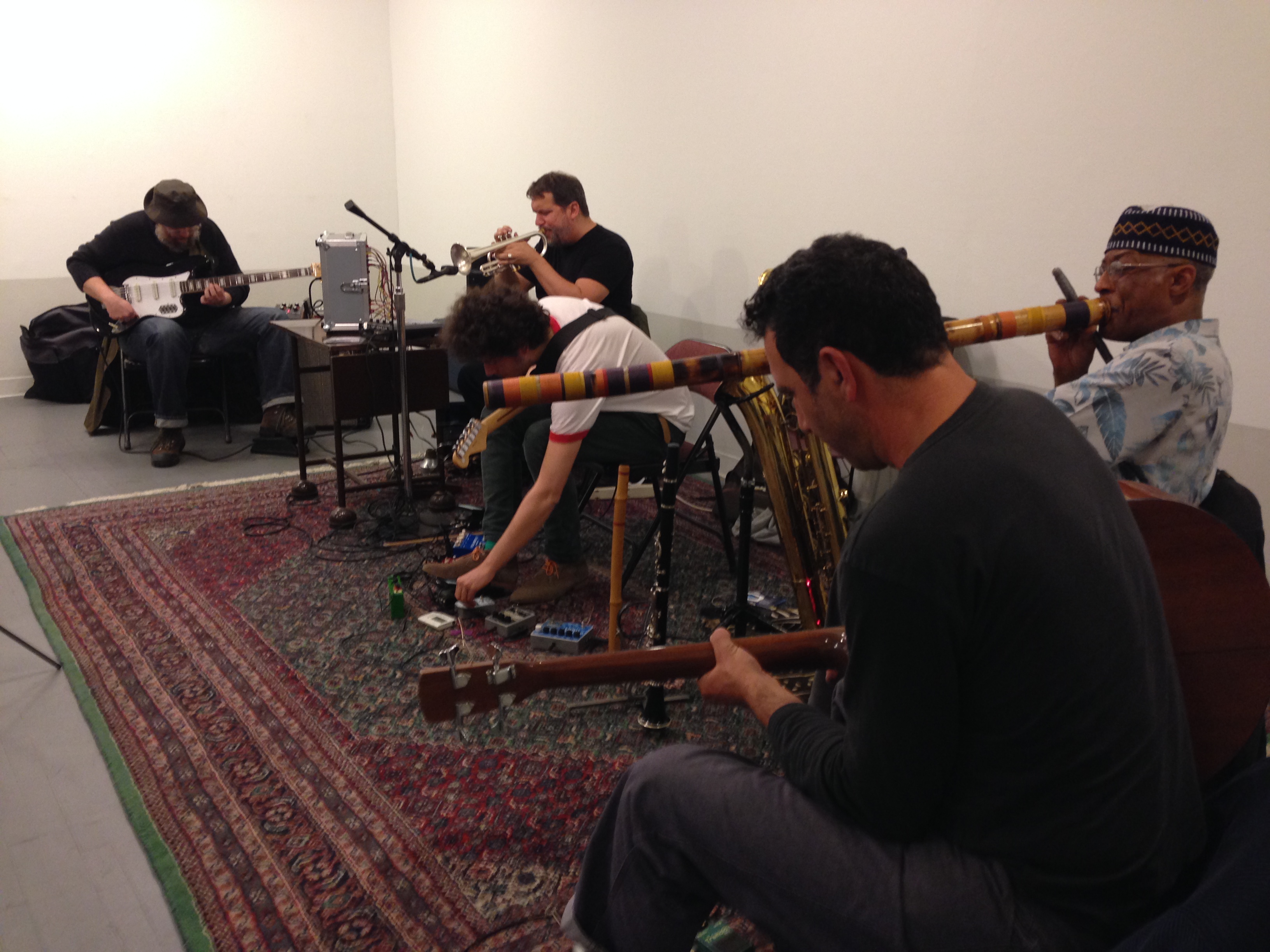