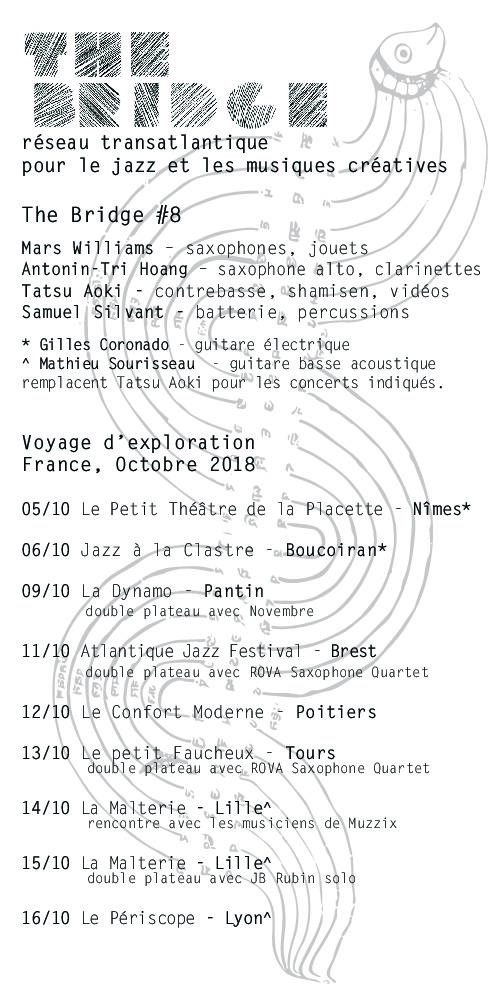 This ensemble, in a slightly different configuration, first crossed The Bridge in the spring of 2015, towards Chicago. As is customary, the members of this quartet had never played together before, except for a few preparatory sessions for each of the saxophonists with the drummer (Samuel Silvant first met Mars Williams during a recording with Larry Ochs, Julien Desprez and Mathieu Sourisseau in April 2014 in Chicago, and Antonin-Tri Hoang for a session in March 2015 in Paris). Mars Williams summed up the situation at the time, giving the starting signal: “The opportunity we are offered is all the more unique and exciting as we are given the time to explore and develop music through a series of concerts and performances. The different vocabularies, the different musical languages that everyone will bring to this project suggest countless and exciting possibilities for experimentation.” Whether it is a question of unfolding the great rhythmic fabrics, unfolding and folding them into more or less accentuated elbows and curves, following and feeding the energetic, electrifying currents, or reconsidering the very mechanics of the instrument as a sound source, transmitter of waves, vehicle of the unheard of, whether to raise the fever of the interplay, to stretch the dough of the souffles, to rarefy their resonance, whether it fuses, tricks or reads, only counts to be capable of anything. With the phenomenal help, this time, of Tatsu Aoki – better than a stand: the most pendulum-like, hypnotic double bass in the whole universe. Soundscapes, endless soundscapes, really relayed by images in metamorphosis, experimental films prepared by him.
It is perhaps not insignificant that it is Samuel Silvant, the band’s drummer, the man of repercussions, who sums up: “What could be more “simple” than drums and reeds? Here we will be “liberated” from the harmonic support of a piano or a guitar; but also from electricity. Back to the primordial? Freedom? Freedom for me essential in the music we defend. I think of the origins, of the drums accompanied by voices. I think of brass bands and the freedom to be able to play in any circumstances… Exploring the repetition, the counterpoint and the different tessitura of the saxophone, the different voices of my fellow players.” And the drummer evokes the reed sections of Count Basie and Stan Kenton’s orchestras as well as those of James Brown’s orchestra, the work of Jimmy Giuffre’s or Steve Reich’s timbre… A treasure trove of saxophones and clarinets, the mountain range of the double bass and drums, the torrents that tumble down their slopes, the lava flows that thicken their flanks, the lifts that are anything but mechanical (the ascents according to John Coltrane), or as Antonin-Tri Hoang so aptly puts it, “the perfect opportunity to reinvent a sound, to become again a child who discovers everything as he goes along, who composes with the objects, beings and landscapes around him. To find a common music that would no longer have an age, no longer an origin, but a language to chirp, feet to move and travel to grow. » 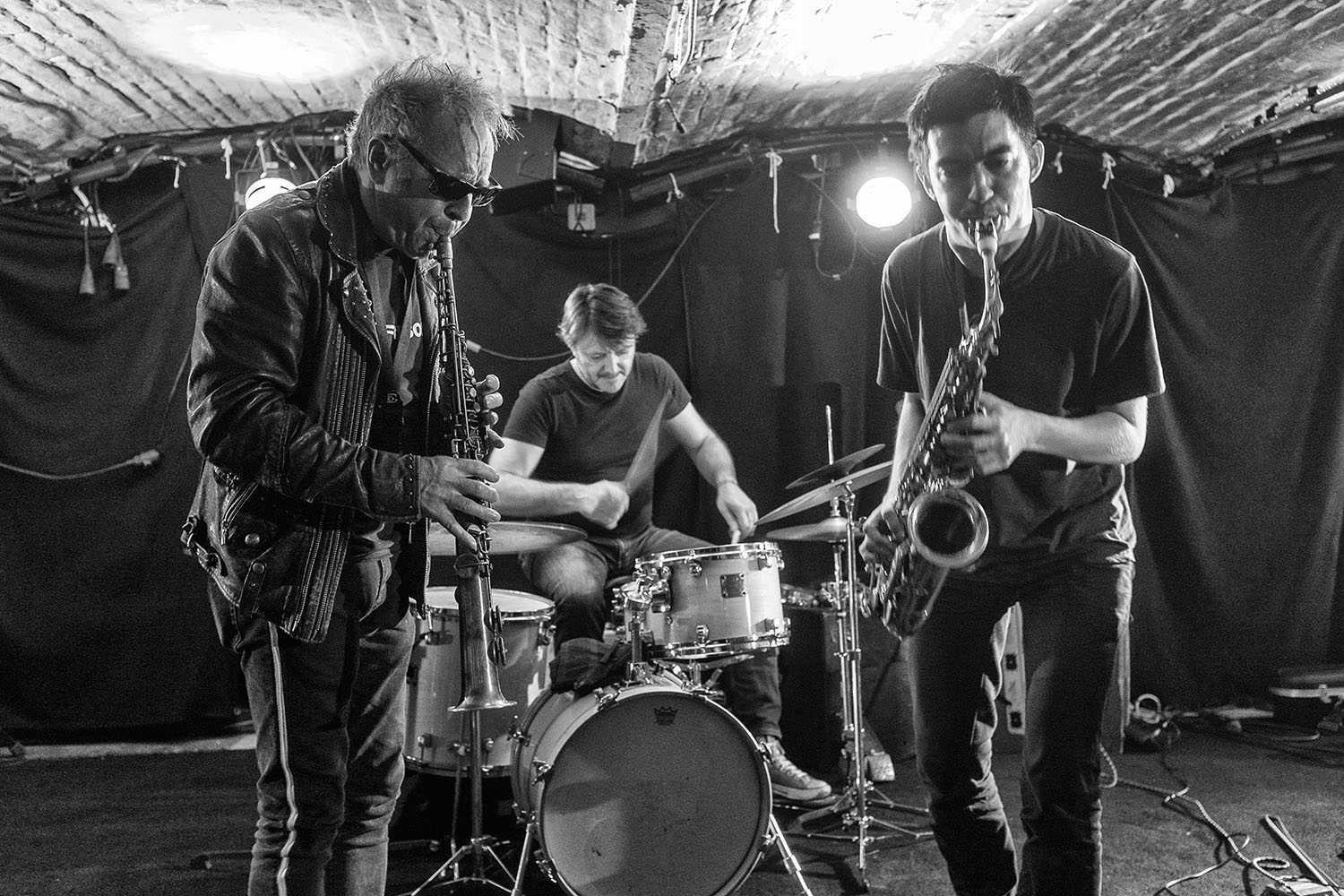 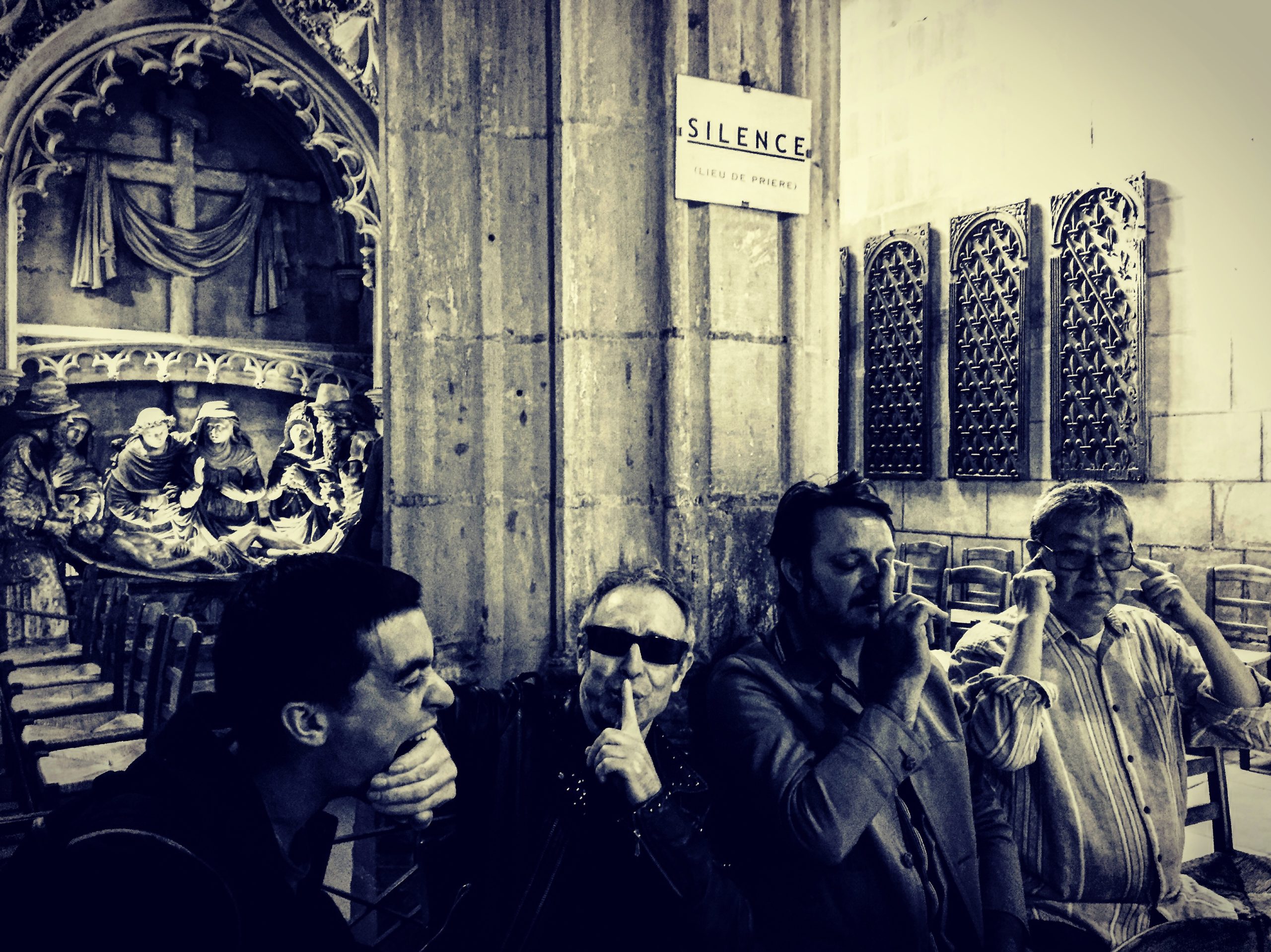