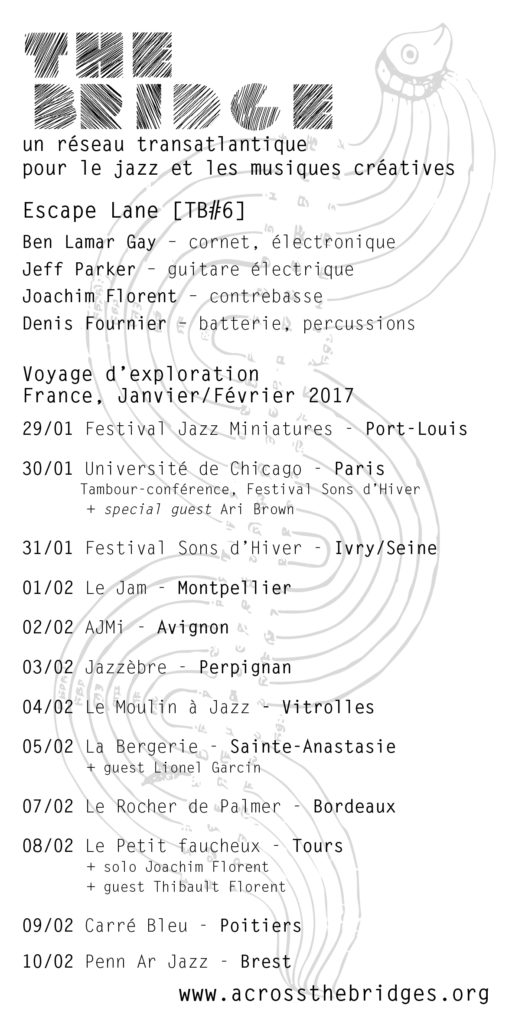 This quartet – Escape Lane – proved that it did not literally play o­­n solid ground. Didn’t the explorers of yore understand waterways as entry points into what was to them the unknown? These four explorers will need no compass. To find their way, they need only to follow the flow of the rivers that makes the essence of their music. “These are like regions, foresees Denis Fournier, harmonic and rhythmic landscapes, and energies, that lie in our memory and can be summoned at any time; all of a sudden, they call a for a melody, a counterpoint, or a polyrhythm.” These landscapes are found in the coal of the memory, and the diamond of imaginary worlds. For improvised music is a matter of unfathomable singularities. Being nourished with so many experiences, collective improvisation is not “emancipation”, but ever-deeper insight. “Under the appearance of spontaneity, this music springs for a long process of maturation, where there is no hesitation to interrupt or relay one another – as in life – in order to tilt and shift foregrounds and perspectives.”

The idea for this formation originally came from the drummer. Not long ago, when he formed the Watershed quintet with Bernard Santacruz and the Americans Hanah Jon Taylor, Nicole Mitchell et Tomeka Reid, Fournier first considered inviting Jeff Parker, who was not available. For Jeff Parker sometimes seems to hammer away at his instrument, equipped with a grammar of undulations and oscillations whose natural flow he thwarts with an extremely rich vocabulary of noise. It’s as if he uses his guitar as a magnifying glass that lets us see and hear all the germs and gems of an efflorescing sonic matter… Once the agreement between the two was sealed, they decided to include two newcomers on their respective scenes, to include in their musical negotiations Marquis Hill’s brewing and Joachim Florent’s branching ­ as well as the oh so special guest saxophonist Ari Brown, grand master of sulphurous winds, historical associate of the AACM, of Muhal Richard Abrams, Anthony Braxton, or Elvin Jones. Marquis Hill, having just won the prestigious Thelonious Monk International Jazz Competition in Los Angeles (and been hired by Marcus Miller), he leaves his place to cornetist Ben Lamar Gay for this tour in France. The task could seem arduous for the latter, who’s intervening at the moment when a new generation of out-of-the-ordinary trumpet players are taking center stage in the North-American scene (such as Ambrose Akinmusire, Peter Evans, Taylor Ho-Bynum, Jonathan Finlayson, Nate Wooley, Josh Berman… and Marquis Hill!). However, whereas many others are thundering on their instrument, Ben Lamar Gay is unique in the sense that he would rather work on his structure – paradoxically ligneous – and deepen its network of ridges and sap. Joachim Florent, on the other hand, develops on his double bass thick broken and bumpy lines, whose volume he stretches and whose tentacles he stretches – with a slenderness that all but evokes some of his respected predecessors, from Charlie Haden on. This leaves the singular Denis Fournier. On the drums he has mastered to art of fluttering on the ovals and lozenges of skins and metals, and on the dilated orbits of this drums – to the extent that it seems that he can vaporize rhythms. With him, with them, there is no doubt that there will always be a lyrical component in the midst of an enchanting improvisation; a singing improvisation.. 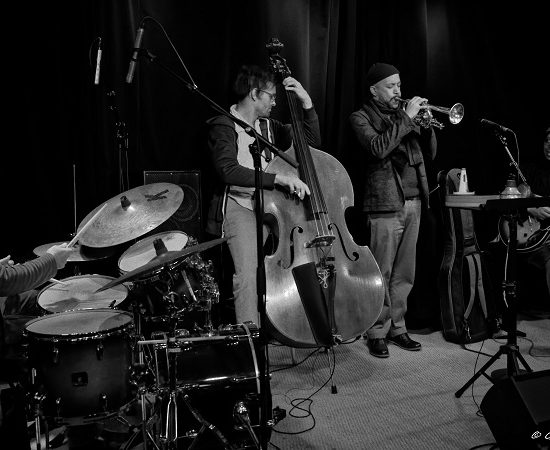 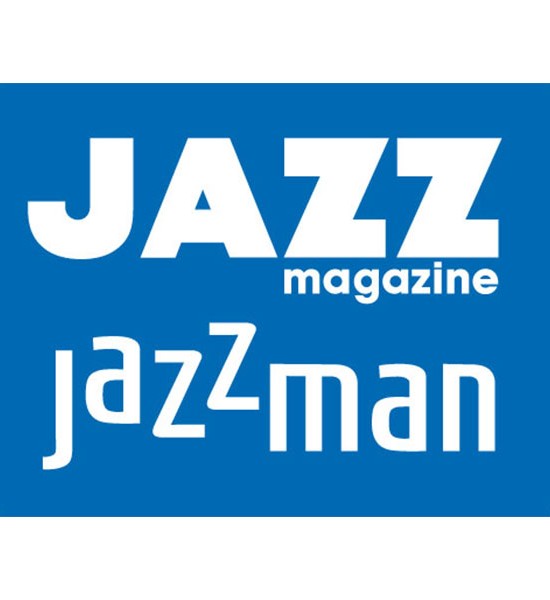 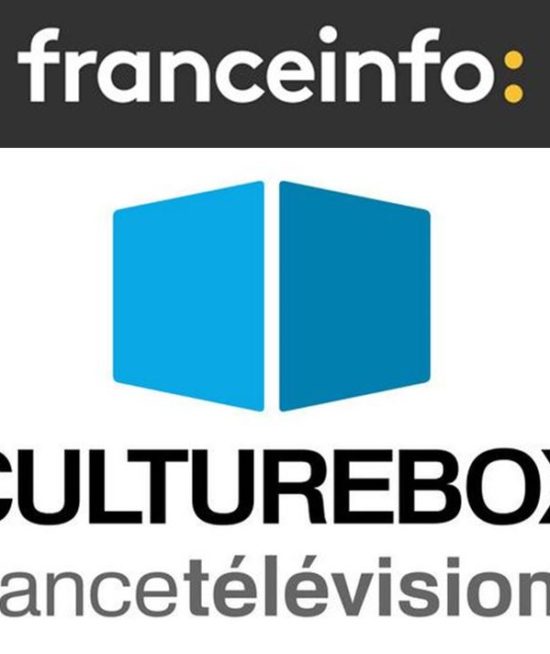 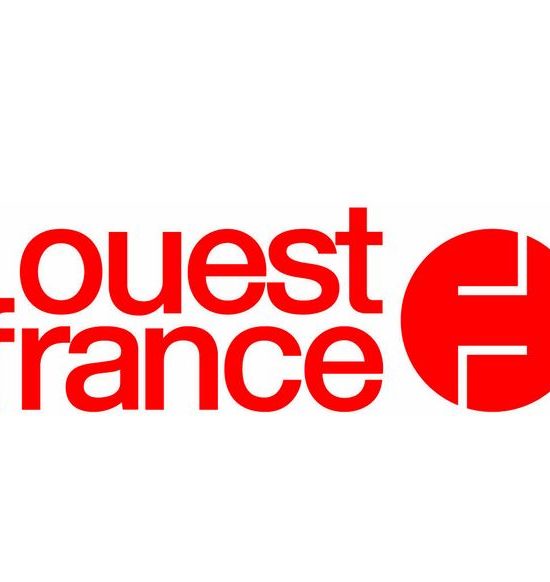 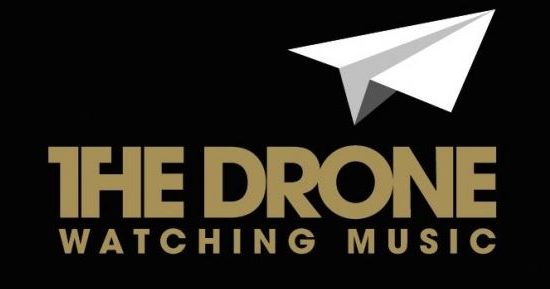 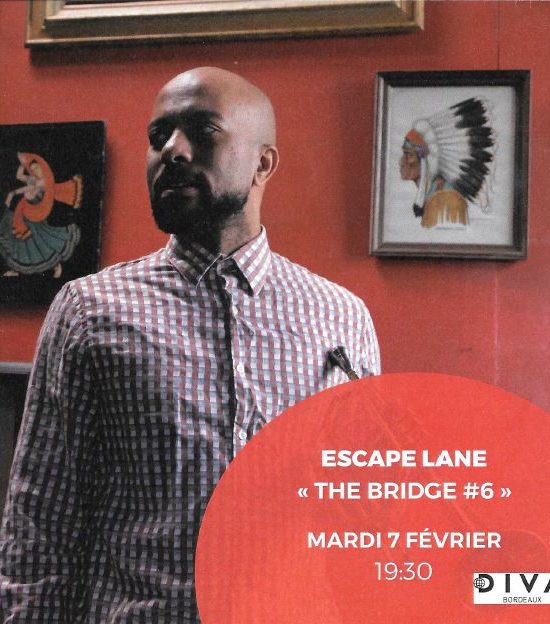