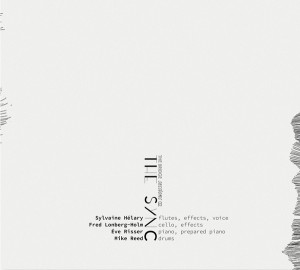 The Bridge is a transatlantic network connecting American and French musicians in new collaborations. Starting a few years ago, the collective has released a handful of albums documenting their experimental spirit, including this one of the the fifth “bridge,” or ensemble, created through the collective (the rest can be seen here). The Sync features flutist and singer Sylvaine Hélary, pianist Eve Risser, cellist Fred Lonberg-Holm, and drummer Mike Reed in late 2014, after a brief French tour.

The album opens on a stark, exposed Hélary solo, with Lonberg-Holm, Reed, and Risser in a percussive conversation. It’s a group improvisation, but there’s a bit of pairing here and there with Reed’s fluid style matched with Risser’s prepared piano. Around the halfway mark, Lonberg-Holm steps forward, and he and Hélary enter into a brief duet that flows into a searing cello solo. Risser counters some of Lonberg-Holm’s playing here, creating an offbeat tension that leads to a excellent duet, buoyed by Reed’s drumming. Hélary returns on vocals, and her singing opens up new territories of improvisation for a group barely 15 minutes out of the gate. The whole opening half hour, “Golay,” is a fantastic example of how four creative musicians bend and fold a collaboration into itself, then re-open it to expose a dozen new ideas. When Risser takes her first big solo of the disc, Reed switches up his playing, driving cymbals urging her on. At the same time, Lonberg-Holm’s effects intertwine for Hélary’s flute for a fascinating, lengthy run.

On the aptly named “Turbo,” all four come out swinging hard and fast. Lonberg-Holm, already a blog favorite, is exceptional here. As Risser and Reed drive the group forward with a punchy rhythm, he and Hélary take a kind of duet approach with a dual improvisation that plays almost like a slant rhyme. Hélary stays in the lower register, while Lonberg-Holm builds from long tones to a high, distorted line that gradually fades away beneath Hélary’s vocalizations. Her extended solo, alternating between vocals and flute, sets the stage for the abstract group improvisation that follows, a deeply contemplative and heartfelt expression of connection sought and found through collaboration. The album closes with “Goppa,” a go-for-broke finale that builds for eight minutes before its abrupt denouement and sudden end, as if the tape ran out or was simply switched off. The first few times I listened, I was sure there was an error in the file, but this seems to be the actual end of the album. It surprises me every time I play it.

There’s an element of fictional storytelling referred to as “surprising but inevitable” that could also be used to describe these seemingly one-off collaborations (it should be noted, The Sync is not a one-off, and the group reassembled in 2016 for a series of concerts in Chicago, which, I believe, will lead to a sophomore release). Yet Hélary, Lonberg-Holm, Risser, and Reed seem to have formed a bond that radiates beyond the music.