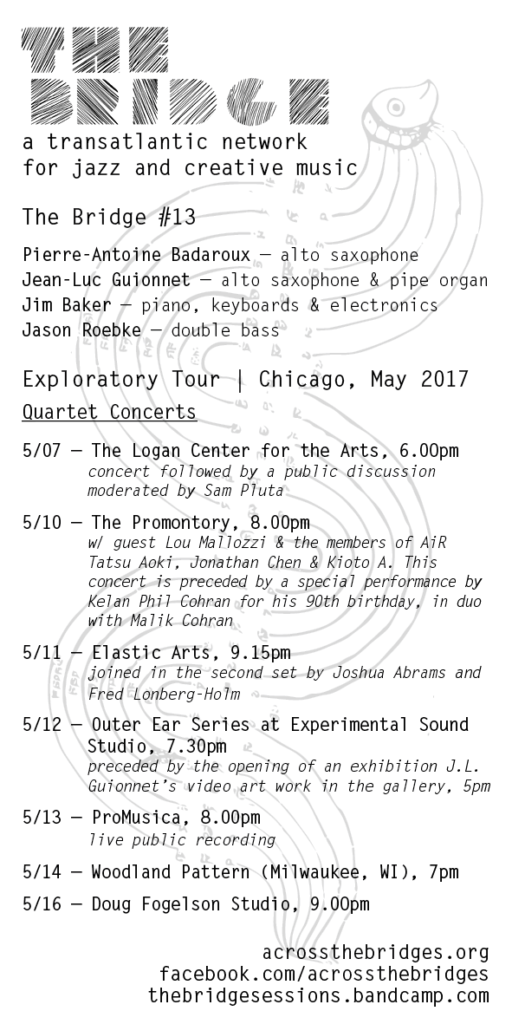 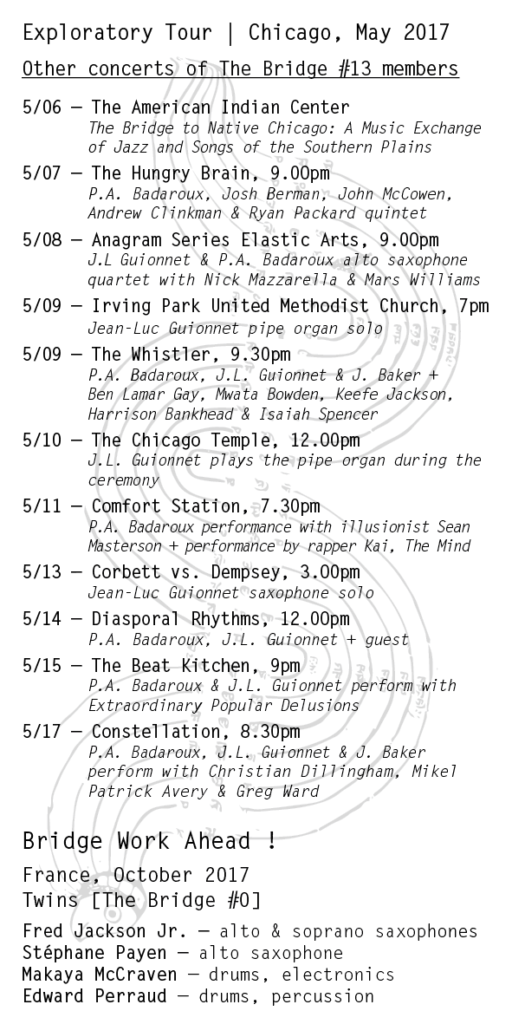 Above all, do not expect anything, be ready for everything. For you’ll definitely have to be all ears for this thirteenth French-American ensemble to cross The Bridge, and on the look-out with them: the four strong personalities that are part of it have become experts in the however uncertain art of astonishment. In their hands and under their breaths, music instruments are at times like microscopes, at times like telescopes, scanning all the states and dynamics of sound, of the echoing space, be they unsuspected or stupefying. And obvious anew. Their meticulousness at times is only matched by their profusion at others, yet the transition from one to the other is never mechanical. And their understanding of interactivity between improvisers accepts all complementarities, all disputes; the highest form of pooling into play. As one of them says: “I believe that the improvised encounter makes contradictions come to the surface: those of individual discourses, revealed by the tension games that lie between them. Each one of us comes with his memory, his experience, his ears, his techniques, his methods, does all he can to forget it all and be in the moment, to play with the others, against the others; to be polite, provocative… Yet, paradoxically, it is only by strongly wanting to be all this at once, that one is oneself more than ever. Will this be an encounter?” And what sort? It’s up to them, up to you to play, to mix the dominos, deal the cards. Your hand is made of an impossible four of a kind, aces.

The ace of diamonds, that’s Jean-Luc Guionnet. His musical work divides itself into as many ways as occasions arise for him to think and act with sound. Those occasions always have to do with a strong meeting with an outside element: an instrument (saxophone or pipe organ), a theoretical idea (what is the “rumour”?), and mainly a collaborating friend… Then follows a collection of themes which, in turn, influence the evolution of the musical work and define the direction of meetings to come: the thickness of the air, the pidgin, the musical instrument considered as an affective automaton, the listening of darkness unto itself, the algebra of and in hearing, sound as a signature of space, a signature of objects, a signature of what it is not… the fact that French language uses the same word – “temps” – for time and for weather, propagation and spread of forms in time, etc. Music is, then, a way to test reality. The emotion Jean-Luc Guionnet seeks in music is made of all these strata and the sliding of one over the other during the act of listening.

The ace of clubs, that’s Pierre-Antoine Badaroux. A saxophonist, composer, producer, and teacher, Badaroux is a very dynamic actor of European contemporary music. His work centers on an exploration of the relationship the forms of memory and of writing, of the undetermined and the improvised. Whether it is through the process of interpretation at the helm of the Hodos ensemble, of composing with his sextet, of improvising solo, of archiving as a producer for the labels Umlaut Records and Remote Resonator, of deconstructing bebop with the Peeping Tom quartet or meticulously reconstituting dance music from the 30s with the Umlaut Big Band, his endeavors are always grounded in this multiplication.

The ace of heart, that’s Jim Baker, who is currently wondering about adjective order in “teenage mutant ninja turtles”, and what this might suggest as appropriate ordering for attributes pertaining to duration of activity, anomalous or distinguishing characteristics, and other forms of categorization. Pertaining to himself, Baker was born in Chicago a number of years ago and has been playing in and around the city (and elsewhere in the Northern Hemisphere), where he was an active participant in the nascent free improvisation scene in the 80’s, just like he was the house pianist at the weekly jam sessions at Fred Anderson’s Velvet Lounge. For most of the past decade, he has played weekly, mostly on piano and analog synthesizer, with the improvising quartet Extraordinary Popular Delusions (which includes Mars Williams, Brian Sandstrom and Steve Hunt), and in many collaborative ensembles with Edward Wilkerson Jr, Ken Vandermark, Rob Mazurek, Guillermo Gregorio, Keefe Jackson, Joe Adamik, Jason Roebke, Avreeayl Ra, Dave Rempis, Joshua Abrams, Bernard Santacruz, Rafael Toral, Samuel Silvant, Michael Zerang, David Boykin, Frank Rosaly, Charles Rumback, Greg Ward, Vincent Davis, Fred Lonberg-Holm, Hanah Jon Taylor, and probably some others…

The ace of spades, that’s Jason Roebke. The diversity of Roebke’s musical associations makes him one of the most sought after bassists in Chicago and beyond. He composes music for various ensembles including two critically acclaimed recordings by his Octet. Solo performance and a duo with dancer Ayako Kato are also at the forefront of his creative activities. His playing is intensely physical, audacious, and sparse. The Chicago Reader described his work as “a carefully orchestrated rummage through a hardware store”. Roebke studied privately with saxophonist and composer Roscoe Mitchell as well as legendary double bass pedagogue Stuart Sankey. In 2009, he was awarded the Fellowship in Music Composition from the Illinois Arts Council. Roebke tours widely in the US and Europe.

Four of a kind, aces. 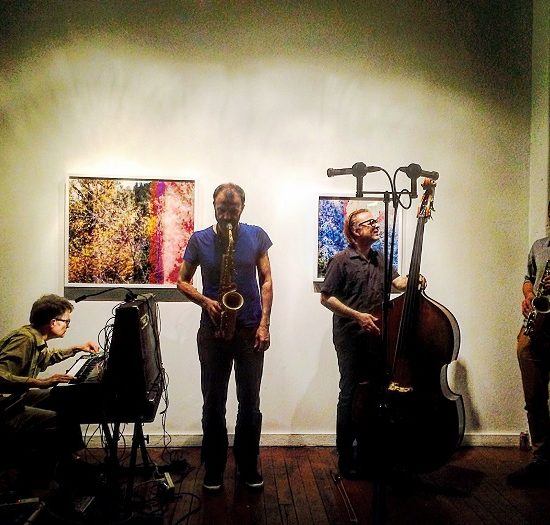 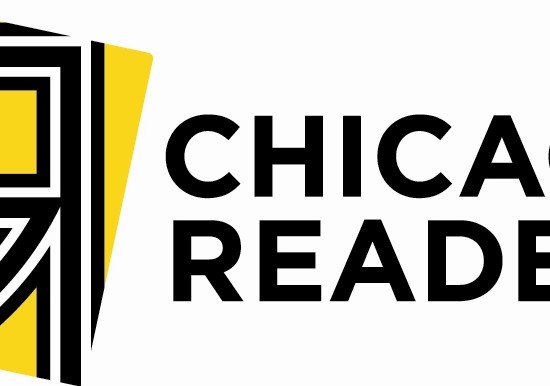 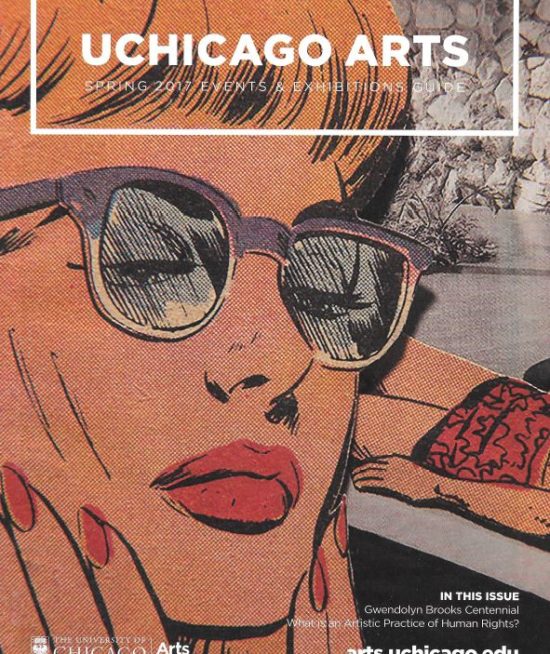