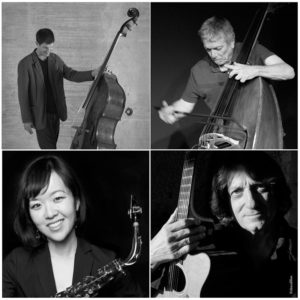 11/09 – Logan Center for the Arts, 7PM
concert followed by a public discussion and Q&A

“The Bridge #2.2 –experimental residencies at the University of Chicago and tour has been made possible through the Jazz & New Music, a program of FACE Foundation, in partnership with the Cultural Services of the French Embassy in the United States.”

The Bridge, squared. This project, is the second group to be borne of the 2nd generation of The Bridge’s French-American collaborative ensembles. Following an intuition initially proposed by French guitarist Raymond Boni, these four musicians will explore the possibilities of an ensemble with a majority of string instruments and no drums, collaboratively piloted by four individuals with radically different artistic personalities. The idea is to create music which will wrestle with the ideas of unfurling and entanglement, of sound as a set of lines and twists. Remote points in space and time can always be connected, even when it’s not necessarily expected : “since improvisation is a fundamental link for beings to coexist, what interests me the most in this French-American encounter is everyone’s singular journey, and the unprecedented quality of this event.”

At fifteen, Raymond Boni was offered a guitar, an instrument that rejected him until he discovered Django Reinhardt with Romani musicians from his neighbourhood. His technique will remain marked by flamenco playing. Playing all the expressive possibilities of the electric guitar, he never ceases to explore the sounds and the range of his instrument, in order to reach those “songs of tenderness” that are born, even in the heart of sound chaos, from the vibration of the strings.

Bassist, composer, and improviser Anton Hatwich has lived in Chicago since 2003. He was born and raised in Rockford, IL, growing up in a musical family. In late 2002 Hatwich started spending large amounts of time amongst Chicago’s improvised music community, and by spring of 2003 he was playing so much in Chicago that it made sense to move there. Since that time he has played in endlessly varied groups of (mostly) improvising musicians, with some combinations sticking around longer than others. A partial list of his collaborators includes Frank Rosaly, Keefe Jackson, Aram Shelton, Nick Mazzarella, Russ Johnson, Tim Daisy, Jason Stein, Fred Lonberg-Holm, Josh Berman, and Paul Giallorenzo.

One of Europe’s finest bassists and a busy free improvisation player comparable to John Edwards and Barry Guy, Paul Rogers is mostly known for his long-standing tenure in the free improv quartet Mujician. A player of finesse and feeling, he has appeared on dozens of albums, performing with Paul Dunmall, John Stevens, Daunik Lazro, Michel Doneda, Evan Parker, Ramon Lopez, and Ivo Perelman to name but a few. He released his first solo album in 1995.

Mai Sugimoto is a Japanese born saxophonist and composer living in Chicago, IL. She performs frequently throughout the Chicagoland area and is a member of Hanami, a quartet that features her original work and arrangements of Japanese music. Sugimoto draws inspiration from Lennie Tristano, Ornette Coleman, Japanese folk and popular songs, and classical compositions. She continues to channel these inspirations and others into writing for her new quartet.